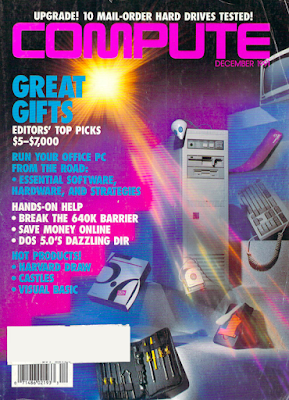 I think this is the last cover image I'll bother including. The post-Omni-acquisition cover art had been interesting, with a focus on computer generated art of the time, but from here on in COMPUTE just has boring glamour shots of PCs, and then Gazette becomes disk-only anyway.

Ad Snippet of the Month: 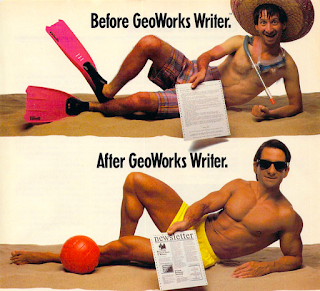 GeoWorks Writer: the power to turn you from fun loving goofball into a American Psycho-looking Bro.

Comic of the Month: 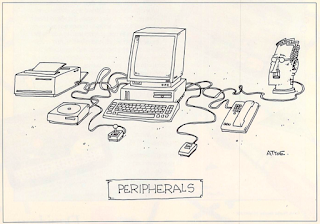 Actually I kind of liked that one; charming in a heavy handed kind of way!

Huh, in the Commodore section I was surprised to see this mini-ad: 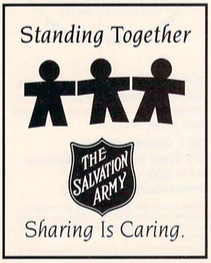 I was in The Salvation Army at the time, so it's kind of striking for me, and probably not very interesting for anyone else. Ah well.

On to the games. 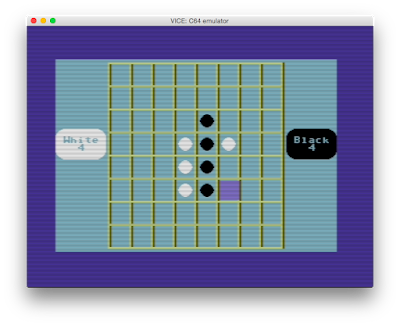 So, any fan of Shakespeare and/or board games will be unsurprised to see this is a version of Othello. The Computer player is a little slow, other than that it seems pretty decent. Rating:3/5


Heh, you know Battle Chess? The game of chess, but when one piece takes another, it shows a little animation? This is like that, but instead of chess it's checkers, and instead of a royal court there's a bunch of the hoverjets from October's game of the same name... they don't just jump each other, they shoot. Odd little bit of a recycling mashup, so an extra point for chutzpah. Rating:4/5
Imagine head-to-head "Crazy Taxi" for 8-bit systems. Sounds pretty cool, right? Now change the cityscape to a flat bit of country. Now replace the music with motory clicky noises. Now make the controls HORRIBLE (fwd/turn/back is fair enough, but having button (when stopped) be "switch into reverse" is odd, and overall it's extremely unpleasant. Add in  the ability to get weirdly stuck in bogs and you have the makings of a well-conceived but surprisingly unfun game. Tentative Rating:2/5
The Disk-Only Bonus game is another one of those crude 3-D labyrinth games, but beset by a kind of horrible UI. I don't mean to sound weird or abusive, but sometimes I honestly wonder if the folks making these games are neurotypical folk, or if they are a bit further along the spectrum: these are games that have had loving amount of detail and attention poured into them, but seem to have little regard for how people interact with them, and how to reduce the cognitive load on the player so as to make the game a more pleasant experience. Anyway, I didn't get far enough in this game to judge it fairly, so I'm going to say Rating:3/5 and leave it at that, because the maze rendition was kind of nice.