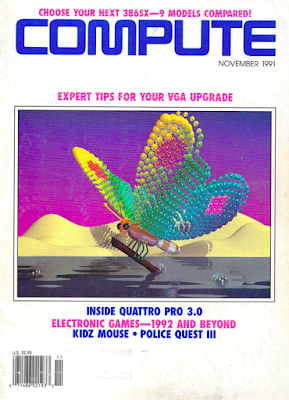 The COMPUTE section touches on Visual BASIC, a language kind of near to my heart-- it was very empowering, after I ran into it in 1994 or so (and taught a class in it as an undergrad at my University's Experimental College) there was nothing as empowering, in terms of letting me make things that would run on modern PCs, until Processing in 2004.

Article Art Snippet of the Month: 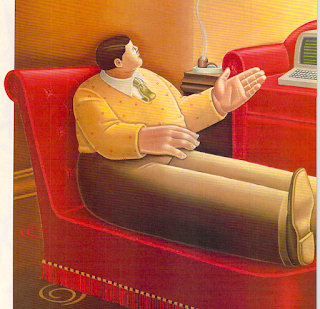 Is that a Botero?

And of course, the comic panels are still HORRENDOUS. 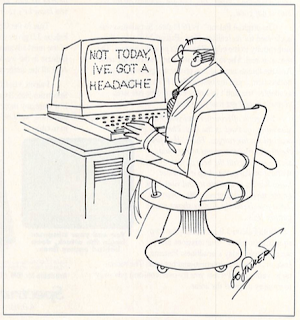 Taking the stalest of stale lines and have a computer say it IS NOT FUNNY.

A "learning" version of the Game of Nim (or maybe a slight variant) where players alternate turns, deciding how many sticks to remove from a single row so that they leave the opponent with the last piece. Rating:2/5
Amateurish take on "falling blocks". Individual custom characters drift down, and you want to maneuver the rows at the bottom so they corresponding negative version "catches" each. You can only move the top row left and right, but you can then scroll the set of 3 ribbons up and down (the topmost row appearing at the bottom or vice versa.) Filling up all the negatives on the ribbon before time is over brings you to the next level. The lack of sound, more interesting graphics, or more clever challenge does not impress.  Rating:2/5

Hoverjet last month was ok, but it feels like this magazine has really lost its mojo.