The main COMPUTE's editorial had me going with their April Fools, for a second - describing how because they're owned by science-minded Omni they're going metric. I started to catch on when they said 3 1/2 and 5 1/4 disks were going to be referred to as 8.89cm and 13.335cm...

It was funny reading about the Apple Pencil before starting this entry (I always covet tablet/drawing technology... "NOW I'll be just as good a bad doodler virtually as I am in real life!") and then seeing this month's "The Return of the Pen". I had forgotten there was Microsofts Windows with Pen Computing - so even before the Newton, the idea was out there.

Comic of the month: 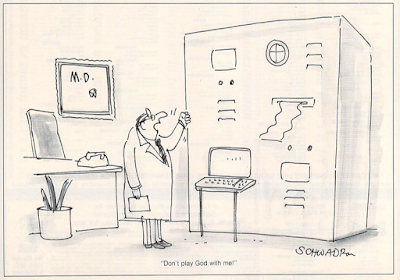 Ok, to the games:
This game has a lot going on. It's a little like Jumpman, in terms of being a level-based jumper/climber. You go around collecting/turning off leaking faucets, looking out for dangerous crabs and this big fish that eventually shows up... like the fish in Super Mario Bros 3 it's most dangerous when you're in the water but will leap out to grab you on land too. Also there are less dangerous ladder-eating snails and a fish that comically flies in and knocks you around a bit. The water is continually rising, and it's weirdly hard to get out of, I think you need to get to a ladder. So, a lot going on, but ultimately not a lot of fun. Rating:3/5
Slow (BASIC) sliding title game, though making color stripes instead of having to get specific tiles into position. Also, uses cursor keys and "f1" instead of the joystick. Rating:2/5