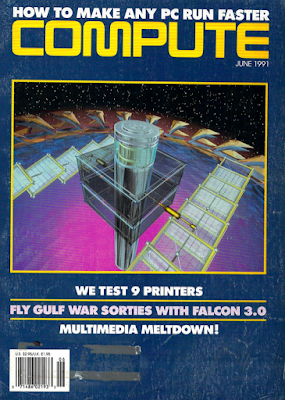 I am kind of glad I don't live in a world where reviews of 9 Printers would be much of a selling point for a magazine. Actually that reminds me of the brilliant Onion article when Steve Jobs resigned, shortly before his death: New Apple CEO Tim Cook: 'I'm Thinking Printers':


“Laser, ink-jet, double-sided, color, black-and-white—the future of technology is in printers. I am absolutely convinced of that,” Cook explained to a packed auditorium as a montage of printers and people using printers played on a screen behind him. “What is the one thing people will always need? It’s obvious: printers. Printers with fax machines attached, printers that collate and staple, perhaps a printer that makes photocopies. Anything’s possible. It’s called innovation.”

In the Gazette Section, the applications are getting hardcore geeky: a Reverse Polish Notation calculator and another calculator to design coils for electronic circuits.
Come to think of it, this game is a bit geekier than average as well. You control a tiny little Asteroids-style ship. This is a flick-screen game, and space is an 8x8 grid (you start at your mother ship in the top left sector (sector 11), and charmingly harmlessly bounce off the edge of the screen when at the edge of 'space') One of the sectors contains a cloaked enemy ship, but you have to find and destroy 4 cloaking devices hidden in the big asteroids in various sectors. The trouble is each asteroid takes like 30 hits before it cracks open to reveal a cloaking device (which takes a lot more hits) or nothing. Both the asteroids and the cloakers attract you via gravity, so part of the game is figuring out how to get in close enough for your River Raid style gun to pour in sufficient bullets without getting so close you get sucked in. (That "one bullet onscreen" effect is especially weird as your gun goes rapid fire near a screen border, then very slow as you pass into the next screen.) There are also these seeking drones that dumbly chase after you and take 5 hits. Then the base takes another 100 hits. Overall it's a weird study in determination. Rating:3/5
Two player only, split-(mini)-screen run around the dungeon, collect treasures. There's something about traps that means your stuck and your opponent (whom you can't see on your own screen) can steal the treasures you grabbed. The footstep player icons are kind of cute, otherwise there's not a lot to be said about this one. Rating:2/5