O, brave new world that has such boring cover art. Like I previously mentioned, I can't be arsed to copy over these stupid PC hardware glamour shots. The old Gazette covers were informative, the earlier OMNI-era COMPUTE covers were cool in a cyber-90s kind of way, but these are just dull, and not related to the mission of this blog.

I admit, this comic made me exhale in amusement: 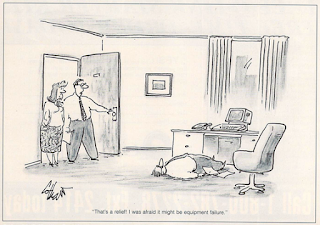 Alright, on to the games! Game.

Clone of Columns, probably my least favorite of the Tetris genre. Rating:3/5, 'cause I guess some people liked the game.

Sigh. I guess this year isn't shaping up much better than last.