Man, I only had one 4 star (or greater) game from 1992 to add to the site's accompanying game archive page. Here's hoping 1993 is better, but I'm not super optimistic.

The Gazette intro section mentions that competitor RUN magazine was closing its doors. (Heh, wonder if they did any type-ins-on-disk...)

Comics of the month... This one made me snort: 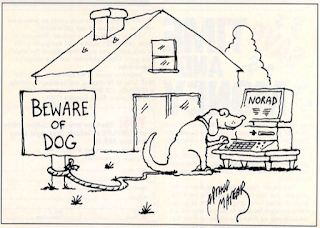 but this one seemed more true: 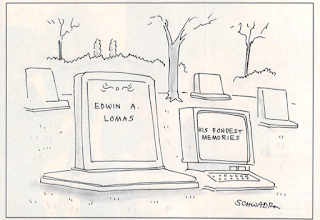 Anyway...
Oddly old-school sprite work in this one (the graphics in Yanney's character based games were pretty utilitarian looking as well.) You are the mouse roaming around a field with 4 cats and 3 pieces of cheese. The cheese is drifting around the maze as well. When you hit a piece of cheese it shrinks and runs off to a different part of the maze, needing five hits to be fully consumed. You can press the button for a bit of limited turbo boost. I think the game suffers because otherwise the mouse is exactly the same speed as the cats; if it was a just a bit faster, the advantage of the cats wouldn't feel so overwhelming. Rating:3/5
The old pen and paper game where you take turns drawing lines on a grid of dots, and claim a square by completing it. This is just a disk-only bonus, but they did just about the same game exactly 6 years prior and even a more innovative variant two years before that. The UI of typing the two letters to connect works better than I expected, though it limits the size of the board, and I suspect the AI might be absolutely lousy. Rating:2/5