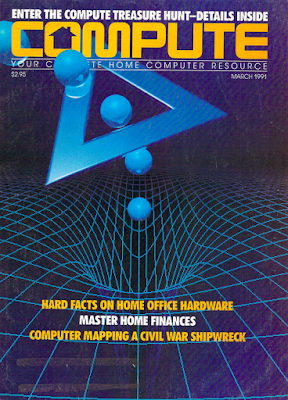 "64/128 View" mentions 30,000 people attended the World of Commodore in Toronto-- man that's big! (They mention the copies of the magazines they pre-shipped getting stuck in customs.)
Not a bad little puzzle game, though not up my alley. (I liked the title screen a lot, and it's close enough to the gameplay that I'll leave.) Rotate and swap squares to connect every + terminal to a -. The game features a two player mode, as well as one of the most confusing menus I've seen:
GAME MAKE PLAY TINT CHEX TEST SHOW
(GAME selects the size of the board and number of players/boards, make actually creates the new level, play runs it, the other 4 provide various kind of hints and help. But like with October's "Line-Up" sometimes it feels like this era has not got the knack of how menus should work)
Rating:3/5 (Sometimes I wish I had a more subtle grading system... this is definitely a high 3.)

Attractive but simplistic one-button reflex game. Your little Elevator-Action looking hero pitter-patters back and forth across the floors, descending at the staircase at the end of each. Termites eat out the floor from right out in front of you, but there's no stopping: your only recourse is a well timed jump via the spacebar. Spacebar is the only control, and you have to jump and make it to the bottom, and that's it. There's a few different difficulty levels that increase the deviousness of the termites and demand faster reactions. Rating:2/5

On a personal note - I don't know how many people are checking in on this blog in real time, but I have a family funeral to travel to this week, followed by a vacation in Montreal, so new entries may be sporadic.