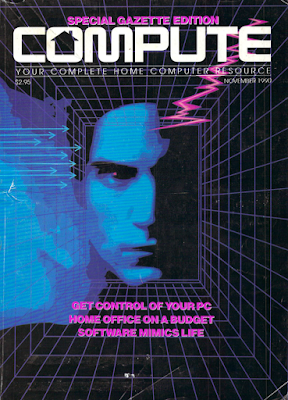 It's funny scrolling through the main "COMPUTE" section to get to the Gazette part, and feeling a kind of envy of the more modern systems... (hey look, The Secret of Monkey Island!  And Wing Commander-- that game is why I got a PC! And articles by Orson Scott Card? Really?) but I think it pushes the scope of this project too much to give the general magazine the same industry attention I've been using for Gazette in general.

Any, Gazette mentioned a new "Gazette Gallery" showing off artwork (and a $50 prize for each work select, and an additional $50 for the "Picture of the Month"...) as well as additional disk-only bonus software... it sounds like one main limiting factor is the number of pages they have for program listings... (they're also stopping reprinting The Automatic Proofreader and MLX each month.)
Attractive and unpretentious puzzle game. 8 doors are at the bottom of the pyramid and you have to toggle all of them to the pharoah's head. On the easiest level, each door toggles one other different randomly assigned door as well (and harder levels have more door-door associations) Rating:3/5
Cute and original single screen game (but with 28 levels, and with level layout that has a big effect on game play)  You play a caveman, and your job is to knock out sufficient Tyrannosaurs with your trusty long-range thrown club to proceed to the next level. Your most menacing is enemy are the Pterodactyls (which seems a little backwards, but given the other inaccuracies I guess we can give it a pass - it's a shade of Pterry in Joust maybe?) -- your club doesn't knock them out, just back a scooch. The green dinos fall (but sometimes just turn) when they reach the edge of a platform, but the Pterodactyls relentlessly patrol their own floors. Control is tiny bit janky... there's a useless jump you can perform anywhere, or jump in a gap in the ceiling and THEN press left or right to land on the platform. Also walking on the platforms is smooth but quantized, you can come to a rest on "whole steps" so to speak. So the other danger is falling off the edge of the world, which is deadly. But despite the imperfections of this game (including a need for a "enemies left to kill to finish board" counter - the greenies max out at 5 though) it's cute, original, and gave me that sense of "oh I really want to finish at least one level of this!" and so I'm giving it Rating:4/5
Very interesting primitive Real Time Strategy game... it reminds me a little of an idea I always meant to code up, what if chess were real time, but every time you picked and move a piece a joystick controlled cursor moved back to the king's starting spot... anyway, this game doesn't reset your cursor, instead you shove soldiers and tanks and missiles on their way to do battle. Combat is mostly of the "stand and exchange blows" variety, but the defensive player seems to have a big advantage, because you can start waling on the moving soldier or tank as they turn a corner (tanks can fire in 4 directions, the surprisingly offensively powered soliders left and right,  and the missiles only fly up. In the screenshot (just me tooling around with the game, though usually I try to hide that fact more) I wiped out my whole row of infantry with a "what does this do?" missile. (Answer: fly straight up, destroying everything in its path) Even more so than most of the "I need to try this with two people", I really need to try this with two people but it's new and fresh enough that I'm gonna say Tentative Rating:4/5.
A disk-only bonus game... a Hi-Rez graphics "Star Castle" clone, though when I look at video footage of the arcade game it seems a bit slow- actually a bit like a tech demo. 1 or 2 players use Asteroids-style control to attack a central point that is protected by multiple rotating walls. Red walls can be destroyed, blue walls are indestructible, and yellow actually bounce your bullets back at you. There are some other enemies as well but at early levels they don't pose much of a threat. I'm really on the fence about this one; on the one hand it's unoriginal and seems to degrade into "slowly drift and plunk plunk plunk" at the shields. On the other hand, it is Steve "Crossroads" Harter, and the two player addition seems cool (though you're probably more of a danger to your ally then the enemy is) Ah, what the heck: Rating:4/5, and this feels like a really good month for the Gazette!