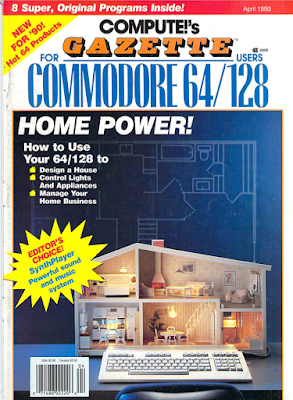 Editors Notes mentions getting in the ballpark of 300 letters a month, and mentions some of the more unanswerable queries they've received. (Though I hope the answer to the guy who had a pile of MIDI equipment and a C128 and wanted to connect things might have been 'get an Atari ST'.)

Quarter page ad of the month: 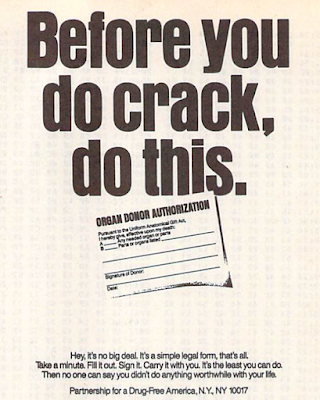 Would a crack-laced liver or lung or kidney have to go through some kind of detox?

Apple Willie - or WON'T HE? My money's on won't, actually. Good graphics including nice parallax scrolling (the flowers, trees, wall, and two layers of clover all scroll at different rates) and nice walking animation, but elementary game play. Snakes and lowflying birds must be jumped over, and the head level birds have to be ducked under - overall reminiscent of the first screen of the Atari 2600 game Dragonfire, except you can't do that "jump while kneeling" trick, and in general the lack of control once you jump is frustrating in this post-Mario world.  And you get to pick up apples. My overly generous score is Rating:3/5
Intriguing little two-player strategy game, all in BASIC. Each of the players' tanks is a bit like a "Big Trak" toy, and can be given instructions to (M)ove, turn (L)eft, (R)ight, or (F)ire their cannon. Players take turns issuing a single line of ten commands for their squad (pressing space to toggle which tank they're giving each command to) Once both players have given their ten orders commands are executed taking turns. It's one hit kills, so I think part of the charm is the simplicity. Slight downside that you don't know what orders are given but if you pay attention when the other player enter moves you'll know which tanks are getting the orders. Also it possibly could have used strong color differentiation for the two sides, but in general this feels like a very playable little strategy game. Tentative Rating:4/5