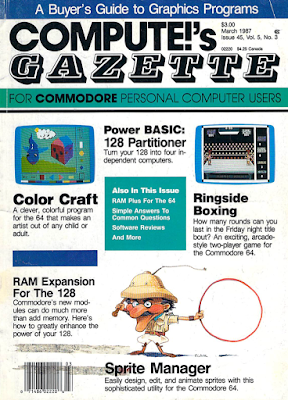 Nothing too exciting in this issue, the fundamentals of graphics on the C=64. There's a "make pictures via shape rubber stamps" called "Color Craft", and a "Sprite Manager" suite that kind of adds some BASIC Sprite and Joystick commands or something.

Boring 128 sliding tile puzzle. Press the key corresponding to the tile you want to shove and try to make the original image. Plus it seems glitchy, maybe, like I couldn't make the final finishing move. Rating:1/5
I assume this is some kind of rushed port of October 1986's "Ringside Karate". You have energy bars instead of one hit kills, but the constant "footwork" animation is terrible, I think there are only two punches (awkwardly accessed via diagonals) and a block, and while I haven't given it a fair test, I'm saying Tentative Rating:2/5