Interlude: On the Realities of Retrogames

This past spring I had an online dialog with Chris Federico, keeper of Orphaned Computers & Game Systems and author of The Classic-Gaming Bookcast - $0.99 well spent for any fan of old games.

One way he adds to his enjoyment of games is to make up his own backstory for them - for a great example of this kind of thing, see his co-author's Adam Trionfo's "Before Reading the Manual" on their review of the obscure Spectravision game "Gas Hog". At one point in our conversation I explained my own reasons for why that seemed kind of alien to me. Recently he mentioned some of my ideas had stuck with him and he asked if I would explicate, possibly for partial inclusion in a future edition of his "Bookcast"... this is what I came up with. (It mentions "Crossroads", a brilliant Gazette game I will be covering in an upcoming entry.) 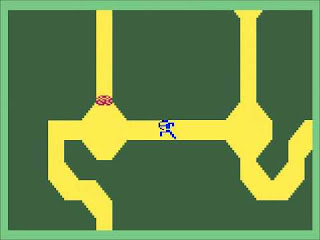 There are two ways to think about the story behind specific retro videogames... for some players, the pixels and bleeps and blurps of an older game are like the shadows in Plato's Cave, technology used to crudely reveal a bigger, "more real" story going on. (The manual might give one explanation of the reality thus represented, but there's nothing stopping players from constructing their own, as you've demonstrated in your bookcast...) The screen for Intellivision's "AD&D: Cloudy Mountain" may just be showing some green and yellow squares (like a kid might have made with graph paper and some markers) but this type of player can see the slime-covered stonework, hear the echo from some unseen dripping water, smell the smoke of the flickering torches lining the walls in their metal holders. And these players' experience is probably the richer for it. 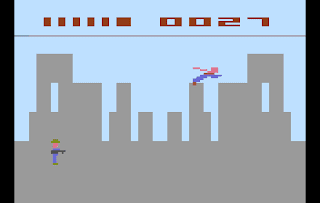 For me, however, the appeal of old games has always been their self-contained aspect: each Atari cartridge in the large collection I lucked into was its own microcosm with its own rules of physics and creatures and boundaries. The eponymous Superman of the Atari cartridge wasn't just a reflection of the muscled, flying hero of the Comic Book; he was a new pixel Superman, fighting crime in his limited pixel world, jailing pixel Lex Luthor and getting kisses from pixel Lois Lane. He's unbothered by Mister Mxyzptlk not because the programmer chose to direct his programming "camera lens" on a particular day in the life of the comicbook hero, but because for Atari 2600 Superman, this is the full extent of what the world- what the universe- is. 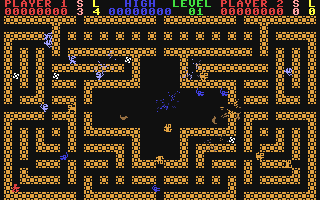 The advantage of this less literary, more literal approach to game story is that it embraces the limitations of player action, it doesn't have to explain it away: Take Crossroads, for the C=64; your little guy fires down the corridor. If a bullet wraps around the screen and hits him in the back, he takes damage. He doesn't have the option to hide against a wall, to maybe dig a trench for protection, to play with ricochet or shoot out a light or light a torch, or to do anything but shoot at a 90 degree angle directly down the hallway, square in the center. The universe, the range of possibility, is fully circumscribed. Of course, it's not devoid of higher-level interpretation: I see a little man, I see a bullet, I see various monsters duking it out, I don't just see splashes of pixels following abstract rules and displaying the results of various computations... as a player I bring recognition and thus a kind of meaning to the display and to the interaction, but that's my understanding from a privileged, god-like view into a self-contained universe, not the recognition of the pixels of a retelling of some other, more visceral fiction.