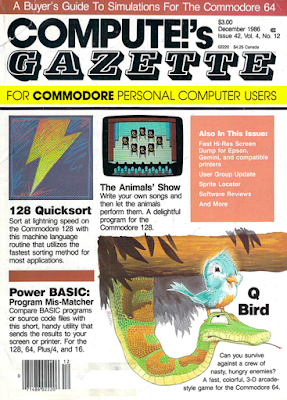 Kind of a slow issue, news-wise... Maybe the Atari ST wasn't selling that much better than the Amiga, Commodore 64 games are getting better, and simulations are getting more popular, yadda yadda yadda.


Laughing at the name's winking acknowledgement of the game's inspiration "Q*bert". The cute and detailed sprites really make this game (and come to think of it, the programmer must be juggling the display order, making sure that creatures behind are drawn before the ones in front.) A little disappointed that the enemy's diversity is only in their movement: Coily- err, the cobra- chases, the purple lizards move randomly, a hawk soars left to right and a ball rolls straight top to bottom, touching anything is death, but the collision detection is forgiving. And there's a flashing egg that freezes all enemies and makes them harmless. Hope on each tile to change it's color, later boards requiring more hops, but as far as I can tell it never plays Q*berts "hopping again changes it back" games. Terrible looping music but the bird's hopping chirp sounds nice. I'm torn about the score here... 4 is a bit dangerous given how derivative it is and it lacks Q*berts variety of enemy threats (like changing tiles back) but it's so cute, and plays reasonably well. Rating:4/5
Sigh. On the one hand, I like the egalitarian and empowering nature of this bout of C=128 games in BASIC... and they ARE generally better than most of the C=64 BASIC games, with the silver lining that maybe people would be encouraged to hack them into better games... because man, there are some stinkers. I've never seen a Lunar Lander/Rescue game with control as bad as this... this whole game is strangely quantized so your lander's thrust is in odd spurts, and the collision detection is unforgiving... worse, collisions' effects are delayed, so you think you're safe then your ship expands in weird ways representing its demise. Endearingly, the program starts each game by asking you "MAKE NEW ROCKS (Y/N)"... but then it generates just one new shape which it repeats 4 times. (I wonder if originally all the rocks were supposed to be different, but the generation process was just taking too long...) Rating:2/5
The Commodore 64 was a brilliant game machine, capable of exciting arcade action and various strategic thrills. This game is barely fun when you're waiting for your food at Cracker Barrell. Rating:1/5

This 128 Toy is charming! You pick one of 5 animals (frogs, parrots, pigs, cats, mice) each with its own sound, and then the curtain opens on a stage with 8 of your choice, each tuned to a different note. You can save and load the tunes you then make. This would actually make a decent iOS toy, I think. There are some problems... it's weirdly slow to load, and it would be awesome to be able to mix-and-match the voice, but the presentation was really good, and it was just pleasant to fool around with. Bonus Rating: 4/5