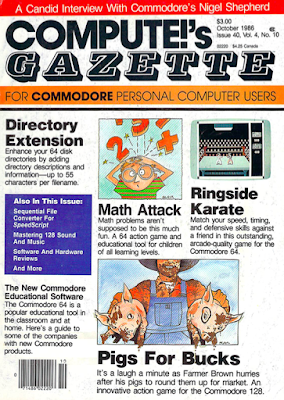 One thing I tend to skip over is the "Gazette Feedback" section - letters from readers, generally technical, ranging from beginners' queries to pretty advanced programming stuff. I guess that was kind of the slow motion Stack Overflow of its time and specialty...

There's an interview with Nigel Shepherd, General Manager of Commodore North America. It talks a bit about the online service Quantum Link... which later became AOL... which is looking to buy my company Millennial Media, interestingly enough.

There was a pretty decent looking article "A Gateway to Machine Language" that had a lot of BASIC commands and their ML equivalents.

Bruce Willis?? You don't suppose... nah. Anyway, this is the first 128-specific game, an exercise in trying out that computers BASIC sprite commands. It's not awful, and cute in some ways (kind of funny oink noises they make), but marred by hypersensitive collision detection - the cute graphics might make you think it's kind of a 3/4 perspective thing, but hitting a puddle is wholly a 2D affair, you can't walk "in front of" it, just under. Similar issue for the electric fence, and hitting the button to be able to lead a pig (via some invisible leash? I dunno) is oddly wonky... plus then you're vulnerable to the other pig. Rating:2/5
So, I haven't fully embraced my bias on this blog, which is definitely more in favor of action and less of slow strategy, or text-heavy stuff. So this is a territory claim boardgame. Seems like the control, where you have to hit diagonals directly, is a little tough.  People who like this sort of thing may find it the sort of thing they like but I'm giving it a Rating:2/5
This seems like a passable "Karate Champ" clone. Unlike the 1-on-1 genre that followed, these games are one hit kills... if you're not blocking when attacked you're going down. Seems solid, though the animations are minimal-ish, and I need to try it against a buddy. Tentative Rating:3/5