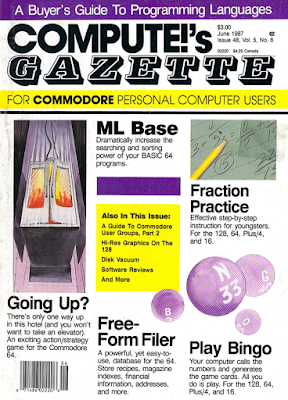 Editor's Notes praises the PET on its tenth anniversary - I guess the aricle's prediction of someday "everyone easily controlling all the dots of light on the screen" is upon us.

My favorite response to a letter from readers gamely (heh) tries to outline the BASICs of writing an adventure program.

Big feature on the history of BASIC, including the Commodore flavor:


Some computer experts [in 1965-1975] predicted that by the year 2000, most Americans would have a home terminal that was connected to a central city computer. However, that concept would have required wiring a city with computer cables similar to phone lines, which would have been a large and expensive project.

The article is looking back at an old guesstimate and the context doesn't quite give a read on if it's being held as a good or bad prediction. I guess bad, since presumably that's talking about dumb terminals, but even dumb terminals could go over a phone line...

Elevator Dodge 'Ems... a bit like the road part of Frogger, but turned on its side and you have to go back and forth. The only challenge seems to come at the bottom and the top, where the lag before the elevator winds around might get you. Also, it looks like the main character was directly copied from Atari 2600 Pitfall! Rating:2/5
This is as much a utility as a game. It's a board printer and Bingo caller. It might be ok for what it is but this blog is judging with a different set of standards of game, so Rating:1/5