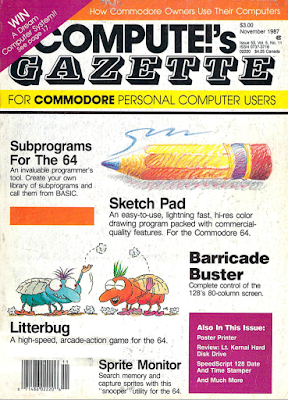 Guess I can't blame them for making a big deal about their drawing program, because this issue's flagship game is a dud. Roam across the playfield picking up litter. 2 "litterbugs" chase you- they're slower than you but one can move diagonally, unlike you. If you press the button (but only while not moving, oddly) you can drop a "decoy" that will attract the bugs until one of them touches it. Maybe if the playfield weren't just a solid grid, this could be a better and less tedious game? Rating:2/5
This C-128, 2-player only program is a weird game. Each player starts with $2.05: 5 of each of Quarters, Dimes, Nickels, and Pennies. Your goal is to amass as many gumballs as possible... each gumball is a penny a piece, so I guess the maximum is 205 gumballs? The only way you can lose money is if you put too big of a coin in a machine that doesn't have that many gumballs, but any machine that goes to zero (or negative, so to speak) is reset to 26. And you can "Sell Gumballs" (which give you the highest denomination coin) or "Change Machine" which breaks your higher coins into smaller ones. The other odd thing is the game isn't over until each machine is stuff with ten coins. Not playing this against a human yet, there may be a neat trick to it I'm not seeing, but for now, Tentative Rating:2/5