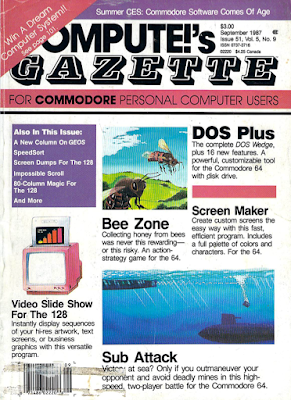 Editor's Notes on the new tech of Laser Printers I'm sure The Onion's version of Tim Cook would approve- though seriously, this comes back to thinking about how weird a pre-WYSIWYG world must have been. (My favorite response to a reader's letter (in the "simple answers to common questions" article answers the metaquestion of what's their most common question? Random printer issues.) 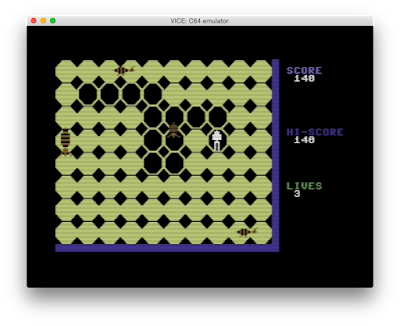 Oof, fancy title screen, playing a version of flight of the bumblebee. (Press run/stop (capslock on my OSX VICE) to start) Like Q-Bird, this game feels a bit like a Q*bert clone, climb over each of the giant hexagon honeycombs to collect the honey. The 3 bees move in relatively interesting patterns (attacking if they see you) Rating:3/5
A 2-player only shoot-at-eachother game. In some ways, not dissimilar to last month's "Front Line's" one on one fight mode, but with subs in a minefield. And sometimes a destroyer floats across the screen dropping depth charges. Weirdly, this doesn't happen every game. I think with some inertia, with anything making this feel like subs (rather than a cigar vs cigar version of Atari 2600 Outlaw) and making avoiding the mines more of a challenge they might have had something here, but as it is: Tentative Rating:2/5