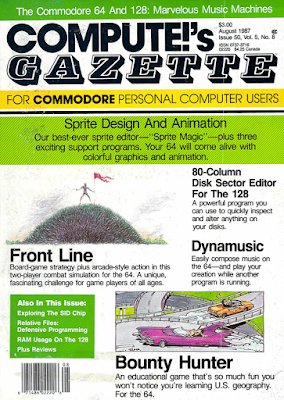 Editor's Notes talk about superconductors. It seems like you don't hear so much about those these days.

"Sprite Magic" gets a 3-year-anniversary reprint, and well-deserved in my opinion.

(The magazine is inconsistent about how many apostrophes the N gets) I admire the attractive presentation of this game but the interface is lacking. Players (2 humans or human vs computer) take turns picking a piece, and depending on the game variation (Give vs Take) they want to minimize or maximize the number of pieces they are touching. I guess it seems awkward to me that to figure out how many pieces you're getting "credit" for, you have to look at the display surrounding the main playfield, rather than having an at a glance way to tell from the board itself. Anyway, this game might deserve a better score, but it's just not my cuppa. Rating:3/5
This game makes me realize how unusual multi-screen games were in this magazine! Anyway, this 2-player-only game is a bit like Archon light. Players take turns moving one solider at a time, each with different speed and strength characteristics. If you claim all 3 hilltops, you win. If you move onto the square of an enemy solider, the game zooms in to a more action-y one-on-one battle to the death: 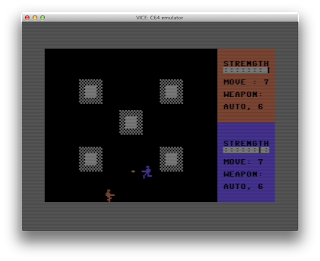 That's it! Points off because it's so hard to read the strength/speed characteristics from the little guy icons (you get a reading when you put the cursor over one) and because the characters lack the diversity of the source material... each one is just a dude with a gun, vs Archon's menagerie. Putting on the list of 2-player games to try out. Tentative Rating:4/5

This is listed in the education/home applications section that I generally have been ignoring, but it seemed very well done, and I liked it's character graphic maps of the USA. In the core game, you have to travel from state to state to hunt down the bad guy- you travel simply by typing the name (or capital, depending on mode) of a state neighboring your current position. Unlike a lot of games of this type, there's a real-time element: the bad guy is moving even as you are slowly typing. Bonus Rating:4/5