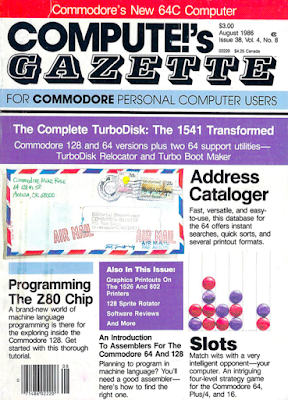 Intriguing Editor's Notes about programming, starting off mentioning it's less correlated with math skill, but English and music... considering I'm a programmer who kept up my double English/Comp Sci major, and whose always played tuba... I agree heartily. And it's how this magazine is so rooted in the culture where my programming skills took root.


Perhaps it's in this area of programming, often called user interface, where the abilities of English majors are particularly valuable

W00T!
It's Connect-4, but against a reasonably clever computer opponent. Or maybe I'm just crap at this game. Rating:3/5
This is an excellent little action game! You steer a maneuverable little chopper around, armed with a cannon... a UFO overhead drops bombs you have to shoot down. You're not the last line of defense though-- there's a force field that gradually gets eaten away. Municipal destruction is a little wonky - every bomb that hits the city lowers the whole place one square, uniformly.

I feel like a lot of playtesting and balancing has gone into this game. The indirection, having to defend the city rather than yourself, is a solid start. You get 4 lives... charmingly your first 3 failed piloting attempts have you dropping out with a parachute, but the last one has you plummeting to earth. The thing is, the bombs are still dropping as you bail, so, like with the arcade game "Rip-Off", the main concern isn't the players own craft. Also, mid-air explosions linger a bit, blocking shots, and I get the feeling that's a bit of tuning, preventing certain strategies of just sitting there and firing away. If I had any complaint, the constant UFO sound is a bit grating. Lasting through 100 bombs gets you to the next level, which does a good job of adding achievable goals and milestones to what might otherwise just be a "play til you die" style challenge.

Y'know, I'm gonna give this a "perfect" score despite the sound and despite its simplicity. (Otherwise, I'm worried only one COMPUTE!'s Gazette game (and maybe its sequel, cough cough) would get the full score) Rating:5/5 (Download Chopper 1)
Simple menu drive pirate simulator, to help teach map reading skills in children or something. Some pretty pixely sprite graphics. Rating:2/5