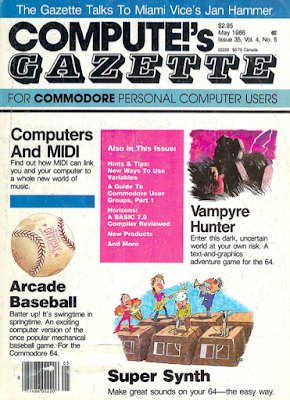 The feature is about Jan Hammer who did the music on Miami Vice and a few other musicians... it must have been an exciting time in electronic music.

The Super Synth program was pretty cool.... a little typing-keyboard mapped musical keyboard, with a neat feature that you could randomly generate new voices, a cool way to see what sounds the C=64's famous SID chip could make: 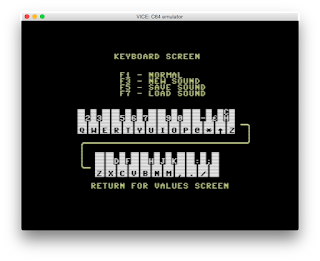 I liked this game a bit more than I expected. It's based on that old-timey, mechanical arcade game. The batter mechanism is pretty well done, moving left to right makes it easier to guesstimate how you might angle off when you hit the ball. There's practice, a one player 3 outs mode and a two player 3-inning version where the other player can pick a pitch. Rating:3/5
Old school text-adventure. Supposedly there is some kind of graphics when you get into the castle but I couldn't be bothered... I got through mapping over 30 areas, including a lot of boring path, before I got bored. Fairly sophisticated parser according to the article, but in BASIC, so it was more bearable in VICE's "warp" mode. Rating: 3/5
Some kind of solitaire. I'm sure it's as fun as it looks. Rating:2/5