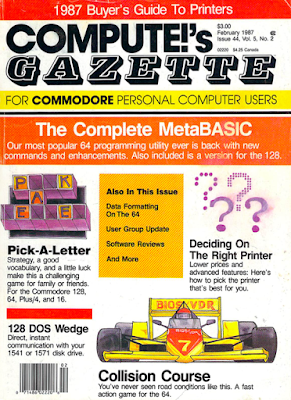 Editor Notes Commodore bringing its PC clone to the United States, mentioning the clones (that would totally dominate the landscape for the next generation after Amiga and ST)... also a vague reference to what was likely the ill-fated PS/2 venture, an attempt to make less clone-able hardware.

One thing I've noticed that I've had to fireup the C=128 emulator from time to time is how prominently "Microsoft" is displayed, in a way it wasn't on the C=64 boot screen... 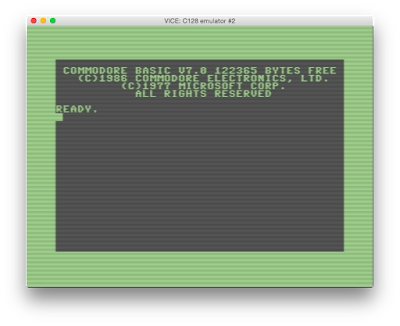 So it's amazing, even without Microsofts' genius deal with IBM to keep control of MS-DOS, which let the PC/clone dominance happen, they and their BASIC would be remembered as a dominant force in the home computer era. (Of course, BASIC was one of Gates' big hands-on programming achievements...)

Also, I'm sort of amused by the sincerity with which some reader went and underlined passages in this month's article on printers. They were really giving it a lot of attention and thought! 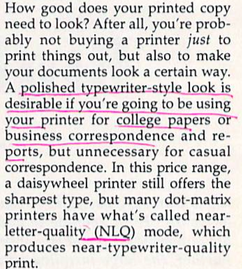 "You've never seen road conditions like this" says the front cover... unless of course you've played Dodge 'Em on the Atari 2600 or one of like a dozen clones of Sega's 1979 Classic "Head On". So this is a very attractive version of a rather bad game. You drive counter-clockwise, a computer opponent drives clockwise and wants to crash into you, you can switch lanes when at the middle of any of the 4 sides, and press fire to go faster. And you're picking up dots. (I wonder if this was one of the first "dot collection" games, the genre Pac-Man mastered? If nothing else it's a decent way to force a player to move all the way around a maze...) Rating:3/5
A Wheel-of-Fortune variant, though instead of a wheel the arrow zips along the row of points, and the card symbols are bonuses or hazards. I guess if someone typed this in they'd have a slight advantage since all the solutions are unencrypted in the DATA statements. Rating:3/5