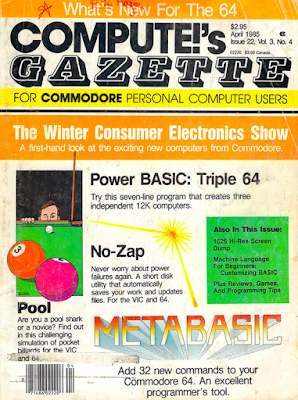 Editor's Notes is a bit different, defending a previously published program "Utility Bill Audit" from a high school computer department chairman for not having comments and having too many GOTOs and GOSUBs. I don't quite agree with the claim of "architectural" vs "improvisational" programming styles.

A sidebar about the Winter CES talks about CP/M, a mode for the C-128 (and available for the C64) that I never quite got.

Interview with Douglas Adams and Steve Meretzky, about the "Hitchhiker's Guide to the Galaxy" text game.

These issues always have an ad for Mimic Systems' Spartan, a thing that supposedly let a C=64 use an Apple II+ software and hardware. Seems like quite the tale.

"MetaBASIC" was not so interesting. Unlike "Simon's BASIC" that offered easier ways of accessing graphics and sound, this one mostly has programmer's helpers.

Cartoon of the Month (from the "Machine Language for Beginners" column): 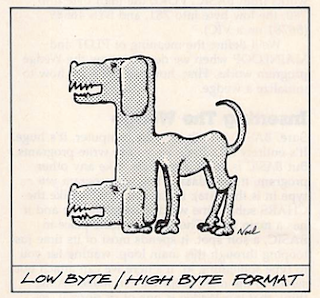 Play a little... 6-Ball? Not bad, actually. You get crosshairs to show where you want to hit the cue ball. (The notes on the C=64 version mention it calculates in 1/256 pixel increments.) Rating:3/5
Another "run around an open field" game. With a time limit of some sort. You have a proximity-clearing  "zap" which also resets the time. Run into a tree and die. I like the enemy character graphic, especially compared to the generic smiley for the player. Rating:2/5

This was a Commodore-64 game in February 1984 (3 months before they started releasing the disks, so I'm not sure if I'll ever try and type this stuff in) and this month it got released it for the VIC... all Machine Language, and using some kind of trickery for the very sprite-like motion, instead of relying on the character graphics. By a 16 year old high schooler, and even runs in the unexpanded VIC. It's a fun game that even has an ending goal of 15 levels. It gets pretty frantic, and the bouncing around of the enemies gets hard to avoid. Rating:4/5