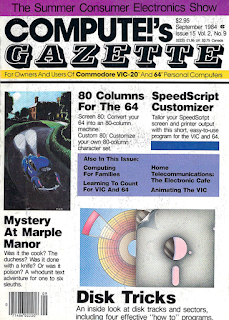 Editor's Notes is all about Jack Tramiel switching to Atari. This passage is interesting:


Commodore, aka Jack Tramiel, acquired MOS Technology back in the seventies that eventually made them what they are today. Among other things, MOS brought us the 6502 microprocessor (long the heart of PETs, Apples, Ataris, etc.). And, more importantly, it brought Jack Tramiel the central nervous system of his philosophy of vertical integration. Over the years, his only competitor with the same capability for inhouse chip manufacturing was TI, and they never quite mastered the art the way Jack did.

In a lot of ways, this is a lesson Apple learned well, even if some some parts of the manufacturing process are actually distributed... like Alan Kay said "People who are really serious about software should make their own hardware." and Apple's adherence to that kind of thought seems to be a real strength going against Microsoft on the desktop and Google in the mobile world.


The computer can be a referee for a game not unlike "Clue". Maybe I'm too biased in my reviews - I'm not going to gather up a pile of people or even a "Player 2" very often, and I much prefer action games to anything else. But, this is my blog, and so I give this game my lowest Rating:1/5
I'm not going to sugarcoat it... this was not a good month. I'd totally have wanted my $12 back. Anyway, "Treasure Hunt" is a bit of a tropical Pac-Man, which makes it sound much better than it is. Run your dude around the island, look out for the skulls meandering about along with the skulls just sitting there, pick up gold coins and bars, the purple barrels have rum that amusingly mess up your control, there's some way to use the fire button to cross the bogwater. Sound is an incessant beeping, and the control suffers from some of that "I'll move you if you are pressing the control when I figure it's time to see if you're moving, otherwise I ignore you" that "Bonking Barrells" had. Rating:2/5 (for drunkenness, and because the Bog was sort of neat looking)