Editor's Notes mention the behind-closed-doors CES appearance of prototypes of the Amiga, with that company being purchased by Commodore, and the corresponding Tramiel lawsuit. (Also a passing reference to the Japanese MSX initiative, I remember the COMPUTE! article about those, though it never got a lot of traction in the USA.)

Ha, the first reader letter asks why the graphics tend to be better for the VIC-20 than for the 64, and Gazette gives about the same reasons I did.

An interview with makers of "Archon" and its sequel, Jon Freeman and Anne Westfall (who together form "Freefall Associates", which is pretty cool.) He's not in the photo, but the article mentions the other Archon author Paul Reiche III who went on to make the widely beloved "Star Control" series as well as the ground-breaking real-world-figurine series "Skylanders"

A note about the disk, starting this month they rearranged thing so
LOAD "*",8,1
Now starts the appropriate menu. Which is what VICE runs when you double click on a .d64 image. So, that's convenient!

This issue has a "Machine Language for Beginners" Like I talk about a bit below, I did write an original Atari game with a lot of ML, but I've forgotten much of it. Maybe I should come back to it here!

And the Ad of the month: 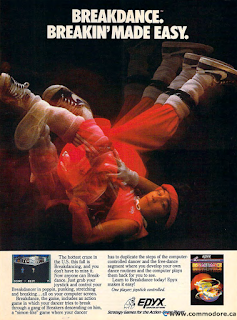 It's hard to overstate how cool breakdancers seemed to kids in the '80s.

A top notch take on "Joust", I really enjoyed the C=64 version of this in the 1980s. (As long term fans, if any, will realize I'm a HUGE advocate of flying/physics mechanics, hence my original Atari 2600 game JoustPong.) This one differs from Joust in that the button hovers ala Jetpak instead of flapping, but otherwise it's pretty similar: fly around the level strewn with other flying opponents, higher flier in collision survives, collect the bottle dropped after a collision before it turns back into a genie. I'm bummed the magazine article doesn't play up how cool the VIC-20 version is- they must use sub-character graphics, because it's a super smooth playing game, given that the machine has no sprites! Rating:4/5

Cute, if simplistic and lurchingly controlled single human vs single computer shooting game. You move left and right with z and c, firing with x, but if you hold shift you jump... which you have to once the enemy has shot a hole in the ground. I like how the terrain takes a few hits and subtley deforms before finally becoming a crater that you have to jump.  Also how your tank has an middle-eastern feel, like an escapee from the previous game. Rating:2/5
Speaking of Atari again... I used to get into semi-passionate debates about "Battlezone" vs "Robot Tank" for the Atari 2600. The latter seems to have more fans - it has cool changing weather conditions, and partial system damage... but I think is ridiculous. You slip around like you're more of a hovercraft, one enemy at a time attacks you, and you "dodge" a bullet just by turning so it's not on screen... a weird ostrich-like "if I can't see it, it can't see me" game mechanic. Compared to Battlezone's gorgeous tread animations, 2-enemies-at-a-time play, saucers, motherships... and a well modeled 3D world where if you heard a shot fired offscreen sometimes you could throw it in reverse and watch the bullet pass diagonally in front of you... well, you can see where my loyalties are.

This game makes "Robot Tank" look like a masterpiece. After choosing from one of 3 tanks (Way too slow vs Only takes one hit vs some deficiency of cannon I can't be bothered to figure out) into combat you go. A lone enemy trundles in from hte left side. Your only moving bit is your slow as molasses crosshairs, from which you can fire a bullet that isn't much faster as it comes in, also from the left side of the screen. If you miss, and you probably will, the enemy will make it to the right of the screen, face you, fire, and disappear. Rating:2/5 and that's being generous.

You know, I was ready to rip into this one, another lackluster BASIC-y outing, but I ended up kind of getting into it, restarting 7 or 8 times til I could beat a level. You start with your little lander in the mothership at the top of the screen, you press space to release, then space to fire retrorockets, just enough to keep you in place. A and D go side to side. (I feel like I've seen this basic gameplay elsewhere, though.) The C=64 version especially felt like it was suffering from "only move if key is down at end of clocktick", but it was easier to get used to with this game somehow. I think just having a simple goal of 4 landings makes it better than other games that don't have as fixed an achievement. Rating:3/5