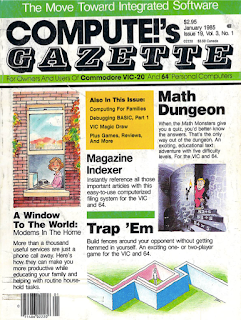 Not too much interesting here. Commodore 128 on the horizon, an interview with Flight Simulator II designer Bruce Artwick. Oh, and Sweetums from the Muppets.

The disk includes 4 out of a "Baker's Dozen" art programs. Also "Math Dungeon", a super lame text-adventure that asks you math problems. And "Magazine Index". Man, what kind of nerd would use a computer to put a list of magazine articles?

Traditional "Surround"/Snafu. Has obstacles. Also an option for playing one player, for some unfathomable reason, as expressed in this screen shot. Rating:1/5

In the spirit of September 1984's "Treasure Hunt", it's another collect-the-dots, avoid the baddies game, but with less design charm. It controls better, though, being all in ML, and has a niftier than usual level select screen. Rating:2/5

It's Activision's "Kaboom!" but lamer. The C=64 version has just one bomb dropped at a time. The VIC version (shown) has 2, but barely.  Rating:1/5