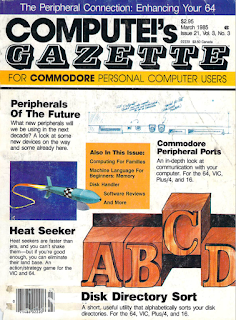 Editor's Notes mentioned Winter CES: the Amiga Lorraine, the C-128, and a "surprise LCD lap (or 'notebook' computer)" that would run on 4 AAs, and have an 80 column * 16 line display... I don't remember that one so it will be interesting to see if the promised followup emerges.

Inteview with David Crane of "Pitfall!' fame, talking about his more recent Ghostbusters. I thought I remembered reading an interview with him about that game, and how it couldn't have been done on the Atari 2600, but later there was a kind of OK port for it. But, this wasn't that interview, apparently.

Ad clip of (a previous) month: 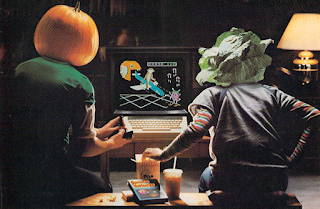 I was assuming this ad for Spinnaker software ("You bought a computer to cultivate your kids' minds. Make sure it's bearing fruit, not growing vegetables.") from December 1984 would show up again, because I seemed to remember seeing it a lot. But it didn't, so I'm posting it now. As a kid I was kind of struck by the falsity of the screenshot; I mean how could you design a game that would look like that when played?

This simple but brutal game is one of my favorites from the early years. One heatseeking missile at time is fired at your plane, and you have to loop around to avoid it.  The sides of the screen wrap for both player and missile. The coolest part of it as making it hit the ground and taking one of its fellow missiles still in the silo.  You can fire a stream of bullets too, though mostly you keep the fire button held down and hope to get some lucky hits. The VIC original isn't as good (despite having 'air mines') with clunky graphics and movement, but not bad for a BASIC game. Rating:4/5
BONUS: you can try out my own browser-based recreation of heatseeker!
3 Guesses what famous arcade game this rips off. In the VIC version 3 "Goats" instead of Dragons and Pookas... and you only get one life. And the control doesn't quite work maybe? Or possibly something was wrong with my disk for this month, it seemed a bit wonky in other ways. Nice little music and title screen. The C=64 port is terrible, they even remove the air pump, and everything looks like Mr. Do on Prozac. Rating:2/5