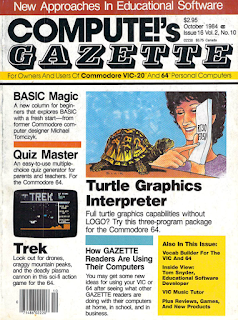 This issue was emphasizing a new BASIC learning column... pity they didn't start it the month earlier, might have gone with the school year.

Slight change to the menu program... you still have to
LOAD "MENU",8 but now it has a sternly worded suggestion to consult the magazine before attempting to run the programs on the disk. Not sure if that's a weak anti-piracy measure or they just got sick of answering dumb questions. Also, ads seem more present on this menu... they've been around for a few months but now "ROCKNEY DISK UTILITIES (AD)" is the first item on the first page. At least they're clearly labeled, though ROCKNEY demands you turn off your computer and reload the menu when it's finished.

The biggest feature this month was "Turtle Graphics Interpreter" which is a sloooooow variant of Logo, including making subroutines - kind of impressive. My friend Jeremy Penner (the guy who founded Glorious Trainwrecks, a site I'm sure I'll return to before this blog is through) suggested Seymour Papert's classic "Mindstorms" which, despite its age, has a lot of smart things to say about kids and computers and was many educators introduction to LOGO. (A growing emphasis on the computer as educational tool is palpable in these issues; come to think of it this is the aftermath of the "Great Videogame Crash of '83") 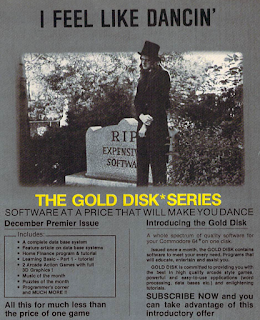 I cut off the main-in form (to an Ontario, Canada address, interestingly..) I guess the angry-goth theme is actually "dancing on the grave of expensive software"? The product seems to be kind of a competitor to Gazette, or maybe more akin to "Loadstar" or "Big Blue Disk"...

This week on Copyright Infringement! I chose the oddly-Stay Puft Marshmallow Man looking explosion sprite to represent how I feel about this game. When you're not exploding (which isn't as often as one might hope) you're clumsily piloting the side view of the Enterprise. Drones, that look oddly like the Enterprise's classic Shuttles, are flying at you. You're meant to dodge them but your ship also has a phaser. A little odd that Beery used cursor keys instead of joystick controls, but maybe not everyone was blessed with a joystick back then. There's something about beaming crystals or something but it didn't quite seem worth the bother. Rating:2/5
I'm going to defy my previous plan of always going for the Commodore 64 version, in part because I think a lot of these games were written on the VIC-20 (judging by how often you can send $3, a blank cassette, and a SASE to get a copy on tape but VIC version only) and because a lot of these character graphic games just look better with the wider VIC characters. Anyway, this game is rather crap. Move from the top left corner to the bottom right, dodge the slowly shuffling "guardians", I guess you get more gold the faster you do it? I like to pretend that the new insult "Basic" (as in "Y'all Basic B-tch-s) is about this kind of thing. At least the movement is smooth. Rating:2/5


I kind of like the little microcosm created here. Your tiny yellow cab (next to the "A"irport near the bottom right corner) makes cute little beeping noises as you putter around the city. What look like misplaced balloons are actually streetlights, and a red light will block your progress. Probably the most charming part of this game is how the Trolleys, moving on their paths back and forth, get all excited and try to run you down when they see you. Anyway, you get various fare requests to drive to or you can pick up a random guy who is sometimes walking around. And make sure your tank doesn't go empty. Rating:4/5 (it got a boost for extra cuteness and because of the neat little microcosm it makes)