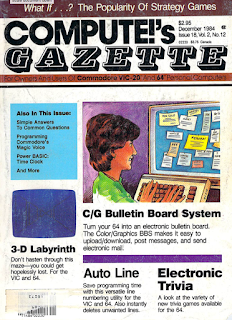 Editor's Notes talk about the Plus/4 and the 16, but also the C-128, as well as the Amiga. Overall you get the feeling the company is stretching itself a bit thin.

Feature was on strategy games, not my favorite but I appreciated the lede's reference to the movie WarGames. (Also the Broderbund ad for 5 games including "Raid on Bungeling Bay" (by Will "SimCity and The Sims" Wright) triggered some nice memories.) The article also went over the basics of Chess-playing programs

Ad of the month: I thought this guy (from an ad for Datasoft's "Mancopter") was totally cool, and as a kid I would redraw it sometimes: 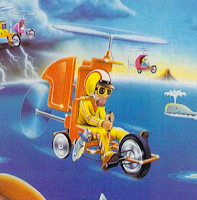 Pile of meh... IN SPACE! Enemies stumble in from the top of the screen, shoot them with your laser before they hit the bottom and explode (you can get caught in the sideways explosion) The VIC version is a bit more polished with an attractive level select screen, but on the C=64 the game's charming signature "enemies destroy themselves by crashing into each other" move is more pronounced. Rating:2/5
Press N,E,S,W to turn, space to move, H for a map, and escape the maze. I've never been a big fan of this kind of labyrinth program, and I found using cardinal directions (rather than left and right relative to the player) kind of distracting. Rating:2/5