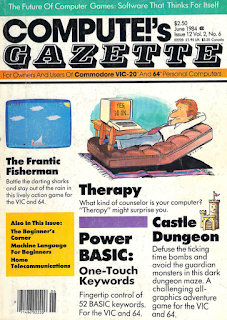 The Editor's Notes starts with muscle flexing about Gazette's paid circulation after a year: 300,000+, putting it in the top half-dozen for the industry, and also mentioning its parent's magazine's surprising growth.

The notes also include a letter to the editor from one Ron Bosse against copy protection. He argues the backups-blocking aspect outweighs the piracy risk. Sometimes when I think about how I sought a Commodore 64 just because the casual/pirate games distribution seemed so much more vibrant than on the Atari 8-bits, I'm not so sure.

An interview with the design team behind M.U.L.E.: Dani Bunten, Bill Bunten, Jim Rushing, Alan Watson. (It mentions an upcoming "Gold Edition", not sure if that ever happened)

There's an in-depth review of "Worms?",  a strategy game I've always liked more in theory than in practice.

Among the other included programs are a version of Eliza ("Therapy"), the educational toys "Spelling Critter" and "Shape Match", and a "Word Scramble" program, where I guess the computer could act as a referee for some kind of home game.

Oh and this ad: 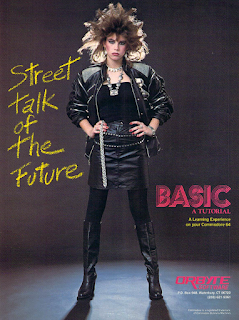 Use your computer as a 3D Tic-Tac-Toe board. No computer opponent. I remember making the same just-board-no-AI in 2D for Atari computers... my 8 year old self impressed my aunt by describing how I would test for every possible win condition. Anyway, nothing very exciting here. Rating:1/5

So, take the pool-of-light lamp effect of Atari 2600 Adventure and combine it with a slow-moving character graphic based dungeon map (ala Atari 2600 Maze Craze) and you have this game. Find and defuse 3 bombs in 3 minutes, there are unmoving lizards that block your way until you find a sword, there are some locked doors that need a key, a pits you press "L" to fly over.

It looks like this game, and many of the others, started on the VIC-20 and then got ported. I think that computer's clunkier 22-across character set was probably better for this kind of game than the C-64's 40 across, more rectangular characters.  Rating:3/5

This game has a bit of a Missile Command theme but is plagued by flickery character graphics. That little blue plus sign is your crosshairs (interestingly it sometimes changes colors when it crosses where a star is.) The Cyon ships lurches downward, and you need to get the crosshairs to where it is and press the firebutton to send it hurling back up into space. It tells you how much time you took, how many shots, and at the very end your rank.

I'm trying to figure out why a surprising number of these games ask for a skill level 1-6.
Rating: 2/5
Oof. This game plays like a parody of a Nintendo Game-and-Watch. Use < and > to get to the correct side of the boat to repel the shark or raindrop that threatens you. The pattern doesn't change: Shark. Raindrop. Shark. Draindrop. Space automatically does the right thing (Punch & Judy stick or suspiciously short lived Umbrella... which you only get 3 of per raindrop, though since it's timing sensitive that doesn't end up mattering much. Rating:2/5