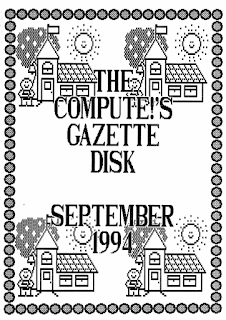 I accidentally switched over to the advertisers section, and was amused to see that regular contributor Maurice Yanney had apparently struck out on his own a bit: 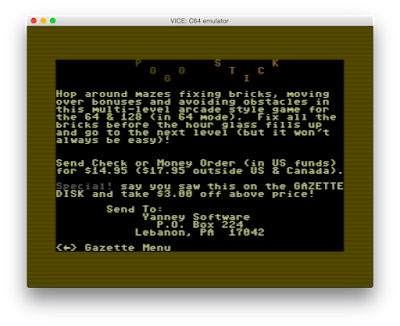 I found a place to download a cracked copy...
It was... eh, ok. A Jumpman-ish (well more specifically, like Mr. Robot in terms of collecting things embedded in the floor) platformer, you scoot and jump around going over the light pathes, riding elevators, and avoiding the things shooting at you. I liked the little pixel hourglass as level timer.

It's funny, I wonder if some of the poorer Yanney games in Gazette are like prototypes he decided weren't quite worth commercial release? Maybe that's a bit cynical of me to think.

Followup: the Lemon64 (great site!) forum post that pointed me to a copy of the game had a guy who talked to Yanney, and says he only sold about a dozen of the game, which is some of why he left the Commodore scene... kind of sad, but again, Yanney is no Steve Harter.

Anyway, onto this month's included games:
There's a very similar looking version of this for the C64 and the C128, but the former bombs out with an out of memory error. It's a dog racing / betting simulator. I like the dog names. Other than that I don't see the point. Rating:2/5
A 1 or 2 player adding and subtraction game... or maybe mostly counting. It's kind of a race to the end board game, and every turn two numbers are rolled and you have to decide if you want to add them or subtract them (or technically, subtract the smaller from the larger - the order doesn't seem to matter) for your move - I guess you'd subtract only to avoid the up arrow boosting you to the previous level or to try to hit the blank spot letting you fall on through. The thing is, if you hesitate the computer picks add or subtract for you. And like I said, the tricky part is quickly counting, since the little dashes are pretty fiddly. Not a terrible idea for a kids board game (I wonder if there's a ketchup/ketchem joke in the color scheme?) but those problems in the execution bug me. Rating:2/5