Oh, bummer... the editorial overview mentions they're stopping "Amiga Resource". It is kind of fascinating that the C64 outlived the Amiga in this regard.
Yanney's trademark dodgy spritework and history of iffy gameplay made me ready to write this game off, but I'm glad I stuck with it... it's good! It feels like he took stock of some of the problems with (the graphically similar) Cats and Dogs and made a more well play-tested, if ugly, game. The story is utterly bizarre... You play an asterisk a tank brick layer machine. Three wheelbarrows are roaming a playfield, carrying one brick apiece. You need to shoot a wheelbarrow to get it to drop a color-coded brick, which you can then scoot over, pick up, and bring to the appropriate spot in the wall at the bottom of the screen. Both wheelbarrows and tank move slower when brick-laden, and wheelbarrows are deadly to your tank, so watch out. (In particular they feel legitimately aggressive when shot, as they then burst into furious speed, and you really have to scoot- especially around corners) Anyway, then the wheelbarrow will go back to the top to refill. (The wheelbarrow's motivation is a bit fuzzy, to be honest.. like they just want to be left alone to carry around their lone bricks.) I couldn't quite get past the first level (sigh) but I liked the feel of this one a lot. Rating:4/5 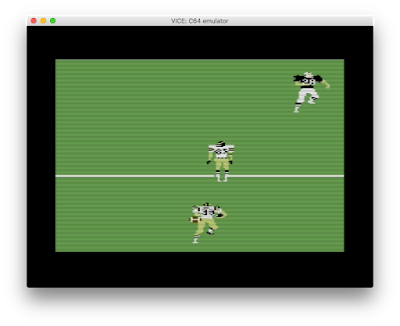 This bonus game is kind of a pain in the butt... I didn't think Commodore games would need an installer, but this "Self Dissolving Archive" unpacks itself to a blank disk, but for some reason doesn't unload a proper boot program... instead you have to load it and type SYS 49152. (I'm surprise that number hasn't come up before in this run, it seems vaguely familiar?) But is the effort worth it? I'd say no. You use some clunky text interface to pick a play, and then it switches to an graphical "action" mode with more joystick control... but the animation is non-existent, that player graphics are amazingly detailed, but it moves like a weird flick-screen thing, with every player moving to a new position on the clunky invisible grid, and only 3 or 4 players at once... odd. Rating:2/5