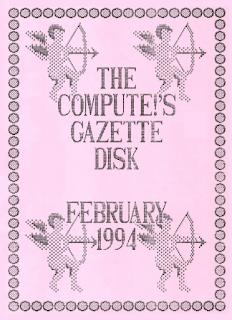 
By the time you read this, I wonder if Commodore itself will even be around. As I write this in the autumn of 1993, Commodore has just reported a $359 million loss for the financial year that ended June 30, 1993.

One, poor Commodore, and 2... what kind of lead times did this thing have? February done in Autumn? I guess it's a combination of how much a magazine's release date always predates the cover date, and then what it takes to pull something together, but still...

(They also mention this month's 128 game "Starship Battles" took up one whole disk side almost, but took an apologetic tone for having fewer programs with a "I know many of you say that you don't like games". Which always surprised me, because except for programming and some light word processing, I didn't know the C64 did much except games.)

I might be doing something wrong, but it seems like the 128 situation viz a viz the disks is kind of messed up: the C128 side no longer seems to know how to boot properly.
Just when I thought Yanney might be getting kind of good, along comes this hot mess. So much is deadly to your little helicopter! Touch the "mountain", die. Bird heads right at you attracted by your bullets (especially in your the gap above the mountain) and hits you, die. Icicles from ceiling fall on you, die. If you manage to use your bullets to dig a hole down to where the goal mineral deposits are waiting, there's a missile waiting for you, and it will launch and you will probably die. Rating:1/5 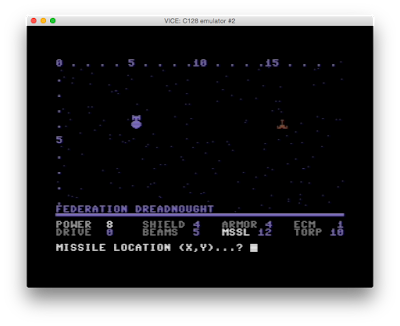 This 128 game has a pretty badass title screen, between the music and the Klingon "Bird of Prey" descending, it was actually a little menacing! The game is a heavily geeky, type in a lot of parameters (juggle ship's power distribution and what not) then watch things unfold spaceship combat game, not unlike the Star Trek board game Star Fleet Battles. I couldn't get into it. Rating:3/5, I was feeling generous about this game's tremendous ambition.