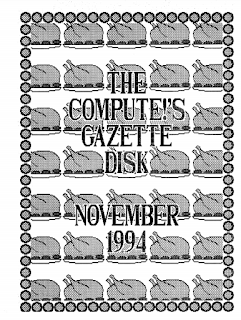 The editorial "64/128 Overview" must've been kind of awful to write, the parent magazine COMPUTE had just been bought by Ziff-Davis who wanted it for its mailing list and shuttered it. Weirdly Gazette survives - probably having moved to disk-only gave it a respite, albeit a brief one.

Also, Q-Link (I think previously called Quantum Link) was closing down - the article calls AOL (my current employer!) Q-Link's "parent service" but I think AOL was Q-link rebranding itself for PCs and Macs, but keeping the original name for its Commodore stuff (which was ten years old at that point, and had run the really intriguing LucasFilm projects Habitat and Club Caribe, predecessors to today's MMORPGs in a chatroom kind of way.)

The feature is "Making the Most of SpeedScript", the word processor from the early 1980s. I haven't written too much about it- it's so hard to imagine using a word processor that didn't have built-in spellcheck (they had some later, but getting the data files was kind of a challenge.)

I've always been fascinated by the Intellivision's Biplanes game, included in their Atari-One-Upper "Triple Action". It's a 2D, physics-y dogfight... to quote the Blue Sky Rangers (the name of the Intellivision dev team):


More hours were spent in the programming cubicles playing Biplanes than any other Intellivision game. Although it's one of the simplest, many programmers felt it was the most challenging and fun of the two-person games. The first time you deliberately stall, go into a free fall, then pull out with a backward loop at the last second to blast your opponent at pointblank range is a joy!

So this game starts with that idea... 2 planes on opposing runways. Just getting airborne is weird challenging... you have to press up at the end of the runway (and make sure you let go of the fire button for some reason) and you're very prone to stall, even more so than the original, at least til you've gained some speed (though after that it's like your engine is in a higher gear? and you can do loops with ease). Anyway, this game ups the ante in that it's not primarily a shoot out - you win by landing three paratroopers on the enemy's base. Controls are kind of odd: left or right sends out a trooper, and then once the parachute has deployed you can still steer him with left or right, even as up and down and fire are still operating the plane... multitasking! You can only send out one trooper at a time, so if you mislaunch you have to wait til the other one hits the ground (and explodes, oddly enough). Another one I really want to playtest with another human; the controls seem odd and the physics not quite as good and maybe the whole thing is too complex, but high points for trying to expand on such a cool idea. Tentative Rating:4/5

Follwup: as I put this game into my archive, I realize that even though the name on disk is "Ligia Latina" there must be some connection to "Ligia Latino" who has made several previous games...