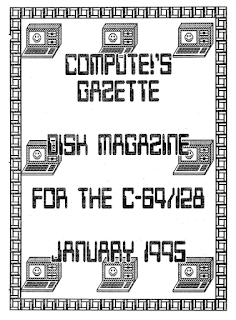 The final issues of Gazette. In some ways the programs and columns got stronger past the heyday of the mid to late '80s, but when your penultimate feature article's description is "Take a Look at Line Numbers. They Can Make BASIC Programming Easier" you know your magazine is not in a place of great strength. (Also, they offered old magazines and disks for sale in garage sale fashion; they're not really allowed to charge, just for labor and shipping.)


The final editorial mentions some of the long term contributors over the 15 year run: Fred D'Ignazio and Jim Butterfield were involved from the beginning to this very last issue. (I remember Jim Butterfield's name showing up on a lot of Commodore software scene stuff way back when... sometimes it seems weird to think of how much expertise he had, ) 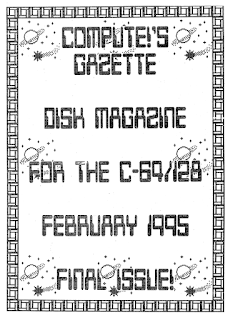 That editorial is really sad, there's a lot of confusion about how they'll be handling the unfinished subscriptions. And the way that most of the articles are written in an unsuspecting business-as-usual kind of way is rather melancholy as well.

No original games these final issues, just some PD stuff.

I'll be wrapping up this blog soon as well, then. I am making plans to do that "playtest all the 2 player only games" thing I keep talking about (to get rid of those "Tentative Ratings") and I might do a special edition about the 6 games I gave a full 5 stars to.

Like the Commodore scene itself, this blog started feeling like it was going on a bit long (318 games in all - that is a lot!) but I've really enjoyed the history of it, finding new game ideas, enjoying how the programmers worked with the limitations of the machine, and charting the rise and fall of Commodore as a force in geek culture. Overall, definitely some of the most fun I've had with video games this year.