From the regular COMPUTE section comes our product screenshot of the month: 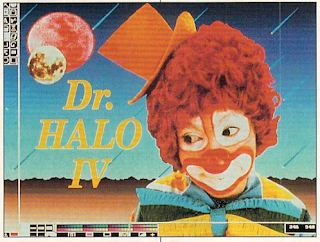 That is not not scary. And who calls a paint program "Dr. Halo"?

This is a delightfully odd game. You and possibly another human and up to like 4 computer players are racing around build stone towers. The goal is to have the tallest tower by the end of the day (the oddly blocky sun travels ) You can climb a tower to sit on top and sunbathe to gain health. You can kick stones off of competing towers. You can drag the kicked stone to your own tower then, or there's an unlimited supply hiding just offscreen on the left and right sides. You can also climb other people's towers and kick bricks off the side. And even drop bricks on other people's heads. So, a lot going on! The controls aren't super-great, and it's hard to tell which tower is yours per se, and the health bars are matched up to players via hair color only... Still, being so beautifully weird and with such distinctive graphics makes this rather heartening. Rating:4/5
Holy cow, from graphics to sound to motion, this game feels more like 1983 than 1993.  A very simple shooter with Asteroids heading down towards you that you can dodge or shoot, and then a UFO that I think is just there for bonus points. Only having a two player simultaneous mode saves this from a lower rating. Rating:3/5