The editor overview section drops the bomb: this is the last version of Gazette that will be printed on paper, they're going disk-only.

Obviously just another sad milestone on the inevitable end of mainstream Commodore coverage. It makes my blog here slightly tougher, since I can't easily flip between the running program and the PDF of its article- I may have to keep two instance of my emulator running.

But like I've said, I think the biggest change was when they got folded into COMPUTE, and all the games lost their extra art and screenshots.

But at least I'll be saved from horrible COMPUTE comics like this: 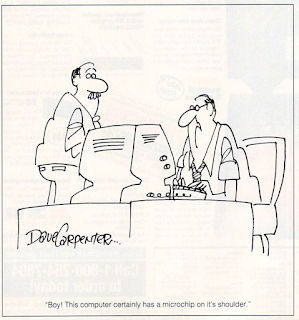 COMPUTE Comic Formula 2: replace a word in a phrase with a computer term. DONE!

Also, there was an 4-page article that felt suspiciously close to an advertorial (or whatever the term is) about using the C64 GEOS to make newsletters, and is full of the nitty-gritty details, like choosing percentages for dot screen bars and how to pick headline fonts and whatnot. I love this snippet: 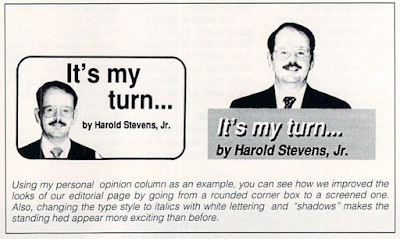 Maybe I will miss the print Gazette after all. (Actually I wonder if Harold Stevens Jr. and The Onion's Herbert Kornfeld might be distant cousins...)

This game is an intriguing mystery! Or...at least what passes for intriguing in these parts. Given the graphics and general gameplay, I was sure it was inspired by Puyo-Puyo but according to Wikipedia Dr. Robotnik's Mean Bean Machine was the first time that came to the West, in late November 1993, so the timing doesn't quite make sense. So this game plays like a simplified version of that game... only one blob drops at time, though, and any two together disappear. There are points for combos and chain-reactions, but the difficulty comes from the control scheme... your blob can move on the roof of the playfield for a second, and then drops, but the controls are super-touchy and there's no visual indication of what column you're over, so placement has as much to do with luck and skill. There are a few difficulty levels that add a color-changer zapper thing, and then immovable blue blocks, both of which I think just add to the toughness. Still, the graphics are supercute, and the core game would be decent except for the controls. Rating:3/5

UPDATE: I was able to contact Graham Fyffe (who in the meanwhile has done some super cool special effects physics work as seen in the movie "2012") and he had this to say:


It's very similar to Puyo Puyo but I did not see that game until the 2000s. My major influence was Tetris, but I didn't want irregular shapes, just blobs. Obviously my other influence was the little jelly blobs in The Adventure of Link and also in Dragon Warrior. So kind of a "jelly blob meets Tetris" influence.

Ah, so my Puyo-Puyo suspicions weren't well founded, it was just the combo of "falling blocks" and "cute colored blobs".
Misguided spelling drill program.  Like March 1993's Stepman it copes with challenge of "how do you get a kid to type a word without quite showing it to them onscreen" (and without voice synthesis) by using misspelled words, but picking one poorly spelled word out of three is much easier and less useful than actually knowing how to get a tough word right. You have a ridiculously short time to maneuver a little space invader cannon under the badly spelled word, and then wait as the spear slowly flies up. Rating:1/5
This is the seventh game from Yanney so far, and definitely the most original. Your goal is to get the paint brushes to fill in the green areas. You control a pencil, toggling drawing and erasing with the fire button. Paintbrushes' touch is deadly to the pencil (you get a 5 second reprieve) but they won't cross the lines you've drawn, so you have to corral them into the green goal areas while keeping yourself out of danger. Like in Bob Broderick's Rascals, the drawback to this game is the maddening randomness of the enemies - it can take them forever to meander to where you want them to go. For both games, if they had just a dash of more aggressive behaviors (maybe alternating between chasing and random, for instance, or chasing you only when you were in a line of site) then the game would have had a much cooler feel and challenge. Also in this game, sometimes the interplay between sprites and character graphics feels a bit off - Still, one of the fresher ideas we've seen in the entire run of the magazine. Rating:4/5