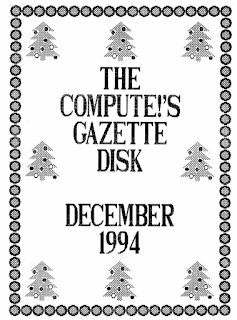 Headline of the month: "MOLDY MOPEDS ON THE INFORMATION SUPERHIGHWAY", from a D'Ignazio column about lo-fi multimedia with ancient computers and VCRs and tape recorders.
This - which will be the final original game pubished by Gazette - is a rather sad little game for a rather sad time. You control a little launcher, firing these balls and trying to get them into the holes on the other side of the screen. You have to get them through the walls with moving gaps between, but the balls will ricochet off those walls or the separators between the holes in a very artificial reverse-direction-and-move-one-row-down kind of way. You can throw lots of balls at once, and you have to dodge ones that come back at you, and there's a time limit. It feels more like an experiment than a game. Rating:2/5