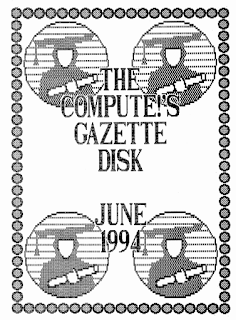 The editorial overview goes into the path of Gazette to this point, and how an increase in printing costs kicked them out of their nestled in COMPUTE role. They do mention "All the ads on Gazette Disk generate barely enough revenue to pay for one of the programs that I purchase each month"... so my guess that it was more advertiser funded than not was incorrect. And with the subscribers that switched "it looks like Gazette Disk will be around for some time." Good to know, cough cough. (The article also mentions Commodore's tailspin.)

I am a little weirded out that "Super-Alarm III" (a PD pick to turn your computer into "a device similar to a clock radio" -- meaning a clumsy alarm clock that can play .MUS files) is written by one Kirk Mook. I thought "Kirk Israel" was a weird enough name, but I am jealous that he has only 4 letters for both first and last.
Invaders/Galaxian type shooter with a magic theme. You operate a cannon and need to blast the flying demons who are trying to kidnap the wizard below, as well as reigning demonfire on you. Getting hit incapacitates your cannon long enough that the wizard will almost definitely get whisked away. If you do manage to shoot a demon-carrying wizard, you have to press up to cast a "featherfall" spell so the wizard doesn't plummet and die anyway. (Also pressing down beams you to the middle of the playfield.) Decent graphics I guess, so-so gameplay. Rating:3/5