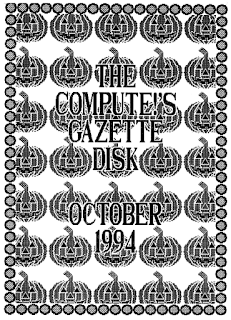 The reader survey results came in:

The 8-bit Commodore market has often been called "mature." Well, it seems that those of us you use [sic] those computers are also mature. The average Gazette subscriber is 48 years old. There's a 94 percent chance that he's male, and he's subscribed to Gazette for about 5 years.

While these are the averages, it's interesting to note that more than 40 percent of you have subscribed to Gazette for more than 10 years and our largest number of users (31 percent) are more than 65 years old.

The teenager blasting aliens with his 64 is no longer the average Commodore computer user! In fact, less than 1 percent of you want more games in Gazette. The number requesting more utilities is 40 percent, and the number who want a mix of both is 56 percent.

First off, I have to worry about selection bias... each of these numbers is "of people who bother to send in reader surveys for disk-based magazines." I'm bummed these fogies are signalling they don't want more games... but given how much hand-wringing there was about Commodore vs Nintendo, by this point the gaming world had moved on to SNES vs Genesis. 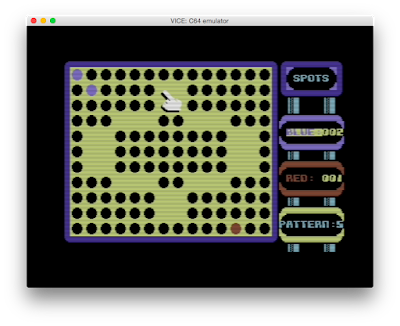 A 2-player-only othello-like board game (with the choice of multiple board layouts). It's a rip off of Spot: The Video Game ("Spot" was an inventive attempt to give 7-Up a mascot, and it (he?) showed up in a platformer game as well) but without the charming animations or computer opponent... each player can elect to move any of their pieces one space (which clones it) or move it two spaces (which leaves the space it came from empty) and then any neighboring enemy pieces around the landing piece are changed to that piece's color. The presentation is pretty good overall, with a custom techno font. I guess I'll give it a higher rating because it's the kind of things the fogies reading this thing then might have liked. Rating:3/5
So this game (possibly influenced by One-on-One: Dr. J vs Larry Bird) looks kinda cool but plays like clumsy crap. I think it's using character graphics? Or else sprites that are horribly controlled. The players kind of bump against eachother s-l-o-w-w-w-w-l-y, and it's effectively impossible to make even an uncontested shot - supposedly you release at the height of the jump, but I could never get it to work. Tentative Rating:2/5