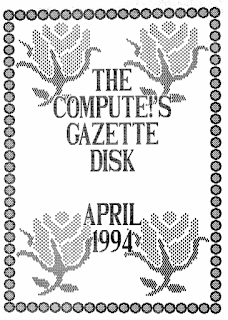 They tweaked the menu system, getting rid of that odd slightly-graphic-y initial loader page I wrote about before, and just adding more levels to their old reliable: 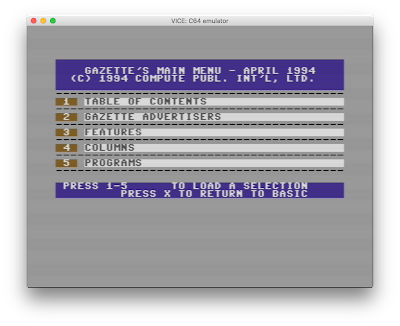 They're also back to having a "Table of Contents" text file.

I was thinking about what I found irksome about that previous menu.  For one thing it was function-key driven, which makes it slightly more annoying on a modern computer... the function keys are still there for backwards compatibility, but they've been repurposed so on a mac you have to hold "fn" to make them work. Overall "function" keys are falling into the dustbin of history - things are menu-driven and mouse or touch now and when there are keyboard shortcuts, people have figured out that mnemonics make more sense. (Man anyone here remember Word Perfect, and those little bits of paper you'd put over your functions to remember what key combos did what?

power users loved 'em, along with "reveal codes" (which is kind of akin to peeking at the HTML of your web document) but I'd have to say humanity is better for having moved on.)

Back to Gazette... I suspect the old pretty menu was a bit slower to load, as was that weirdo faux-GUI they had for a long time.
At first blush this feels a lot like the snake games I was complaining about last time - except you're a bird, not a snake, so you can reverse on a dime without running into your tail. Unless of course you've passed too near one of the patrolling cat heads; then the cat will follow you and the effect is much the same. Anyway, berries are growing and are worth more points if you let them grow, but wait too long and they become brown and poisonous. And watch out for beehives, though I don't think there are any bees around. More cats (with wider vision ranges) get added on subsequent levels. Rating:3/5
Odd strategy/luck game for two players, one of whom can be the computer (endearingly called "Chip") Each player gets a row of switches, 1-9. For each turn a player picks 1 or 2 dice to roll, and then can flip switches that add up to that number -- so if you rolled a 8, you could flip 8, or 1, 3, 4, or 2 and 6, etc. And the goal is flip all your switches. It does get you thinking about probability a bit, and the computer plays a very good game, so it kind of comes down to luck. Rating:3/5
In theory this game is to teach kids spelling, but if anything it's about navigating a maze you can only see a little part of, or maybe just how not to make a good game. A word is on screen, then you're put in a dungeon with the letters for it scattered around. You might also stumble over a sword to fight a monster who will show up, and keys to unlock the doors (that are oddly rendered as stars) But you only see the 8 squares around you. Maybe an option to make the maze visible (with our without the contents) would have made this more playable. (Or even given it a point... I mean, I don't think any letters that aren't in the word are in the maze, so it's more a matter of getting letters in the right order.) Rating:2/5