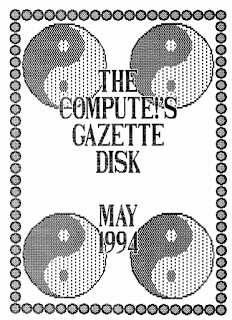 There's a review of "C64S", a C64 emulator that runs under MS-DOS. They say it works pretty well, and being able to save and restore state was pretty cool. I had forgotten emulation was starting to happen back then. Kind of odd to be using an emulator on a Mac to read an article about an emulator on PC.

Ugh, another one of these... not very different than MauriceYanney's Balloon Pop a while back, though the balloons are moving down and not up, plus this one is a little more annoying because you don't just touch the balloons to pop, the pin is a bit more "realistic" in where it has to be positioned. There are also rules about bonuses for 3 in a row and "target colors" but really, for just another Kaboom!-like, who gives a damn? Rating:2/5
Speaking of Yanney....man oh man, I do find myself wishing he could have found someone to collaborate with on graphics - his programmer art is terrible - just look at that car and deer... Anyway, this is an ambitious driving game, but not a very good one. It's loaded with features like deer on the road, road narrows, road splits, icy road, a police helicopter who will tag you if you're going over the posted speed limit, having to watch your gas, etc but trust me when I say that all probably sounds better here than it is in practice. (The score is represented as a dollar figure, and the instructions mention something about being able to get new cars when you save up enough cash, and hitting obstacles comes out of that budget). Besides the terrible art, there are just weird misfeatures-- like no matter how fast you might be going, the deer is more or less keeping up with you vertically, in your direction of travel. The general physics and control feel is so bad especially in contrast to May 1990's Race Ace, that had a delightful sense of having to speed up and pass cars. I will admit this is the only driving game I've tried that has a cruise control feature, so I'll bump up its rating to merely mediocre. Rating:3/5