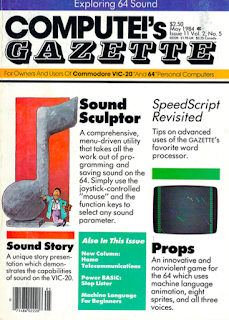 Welcome to the inaugural entry of Gazette Galore... because of laziness, we're kicking off when C!G started putting out a disk version of its software, saving readers the hassle of typing things in. An ad on page 33 announces the launch, with a six month subscription costing $39.95 and a year for $69.95 - about $90 and $160 in 2015 dollars.

Features This Issue: Interview with Will Harvey - his "Music Construction Set" was an impressive piece of software, especially consider its author was still in high school. The article "Speedscript Revisited", going over C!G's signature word processors mentioned an embarrassing bug, with the [n]ext page command getting caught in an infinite loop.  "Sound Sculpture" is a sound editing program, interesting that it features standard Character Graphics (and colors) but a joystick operated mouse pointer. (You actually have to follow the instructions in the magazine, or else you won't hear much.) "Ski Physics" is a kind of stupid math "physics" game - the Commodore 64 seems to have impossible rounding issues. 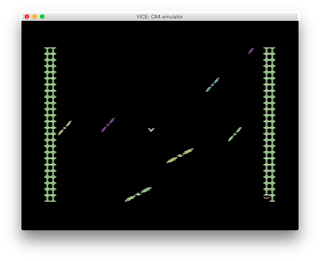 Props - Philip I. Nelson
I have to give this "innovative and non-violent" game its... err, props, it's kind of cute! You maneuver a tiny character-graphic pigeon to its mate, tucked into one of the walls, dodging the spinning propellers, each rising or falling in its individual column - kind of like a more vertical Frogger. The twittering sound of flight is pretty cool, though points off for the relentless "swish swish swish" of the propellers. (Some of those points for the kind of amusing "thwack thwack thwack that happens when your bird gets hit by a propeller and is kind of stuck for a second... low-rez literal slapstick!) More points off for not really having an ending, you just play until you get bored. I really liked how the article of instructions for the game went deeply into the programming of it, including how to trigger the machine language subroutines from BASIC. That's so emblematic of the era, where computers weren't just passive entertainment devices, but devices that encouraged kids and adult hobbyists to make stuff.
RATING:3/5 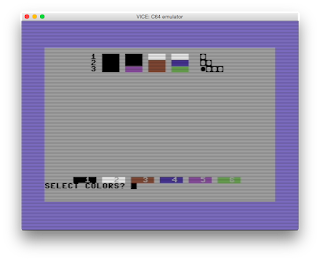 Mind Boggle - Jame E. Rylee
A not particularly inspired version of "Mastermind". The interface is kind of poor, even taking the era into account, when you start it doesn't tell you how many colors there are, they should always show the color with the number that hits it, and "right color wrong space" "right color right space" is ambiguous.
RATING:2/5 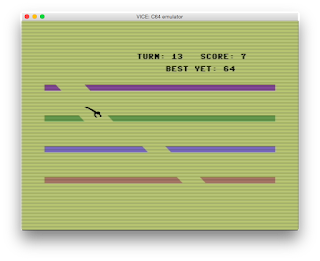 SuperSprite - Nick Sullivan This game suffers a bit from not being played original hardware, since it requires quick use of the function keys. A very wobbly Superman-- err, SuperSprite, is descending to earth, and you have to use the function keys to shove the... "Spritely Gate" bars of kryptonite? What?

So having to hold the Mac "fn" key, along with not having the keys lined up vertically with the bars, is a real distraction. Also the weird wobbliness of the flier is frustrating. Kind of like a proto-escort mission, but the game gets some credit for originality overall.
RATING:2/5