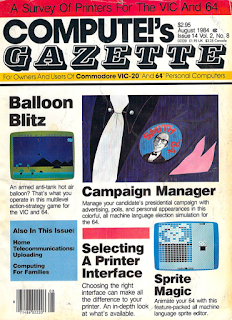 Ha, "Campaign Manager", how timely! The middle of the Reagan years, and at the very outset of of the Dueling Dynasties of Clinton and Bush... unfortunately a two-player only game. Because it's not listed as a "game" I'm not going to do a full review but here's a screenshot: 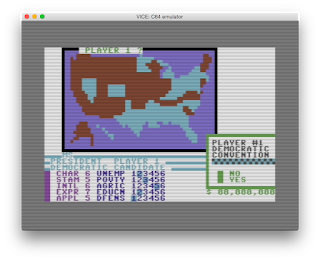 I guess this was still the era of the Democratic "Solid South". I like the Dungeons and Dragons approach to politics...

Of course for me, "Sprite Magic" was MUCH cooler. Like the previous issue's "Ultrafont+", carefully plotting out the art, pixel by pixel, for one's upcoming gaming masterpiece was endlessly compelling. I spent many hours fiddling with this.

Press the button to drop a well-timed bomb and destroy the tank. That's... about it? Cute sprite graphics and it's kind of fun to see the tank throw it in reverse and evade, but nothing to write home about. Rating:2/5
Another attractive game, but again lacking in a lot of substance or originality... steer the Sno-Cat left and right to avoid trees as you ascend the slope, fire button brakes. Not sure if it's the emulation or the game but sometimes the steering doesn't quite work, making this game even less fun. Rating:2/5